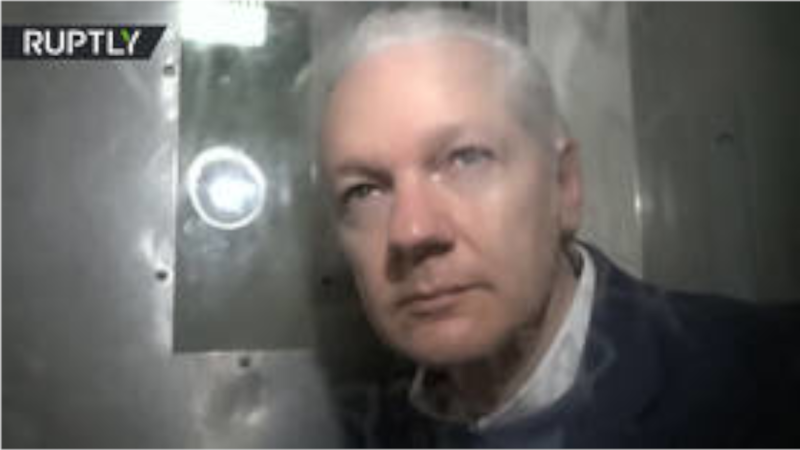 1 DE ENE. DE 2020 —
A contingent or Yellow Vests or Gilets Jaunes are organising to catch the ferry and bus over from Paris to protest outside the maximum security Belmarsh prison where Julian Assange is being tortured on January 25th. This will be the second time a French contingent has crossed the channel to fight for Assange, after one hundred Yellow Vests traveled over to protest at Westminster Court on Oct 21st. The group coordinating these international acts of solidarity is the Assange Ultime Combat Facebook Group.
The French Yellow Vests and their British comrades are planning to rally outside the prison at 2PM, however they are planning for much more than just a small march. As the protest  Facebook event page states:
On 25th January we gather outside Belmarsh prison in London with the French Yellow Vests for a protest to FREE JULIAN ASSANGE. We are aiming for 1000 people so please share this so we reach our target! We simply want to demonstrate our love and support for Julian Assange all day long, into the evening and even into the night if possible, in front of Belmarsh prison, London, with banners, speakers, music, musicians and food trucks. On site toilets will be needed too. We have set up an online donation fund: www.lepotsolidaire.fr/pot/jglqu3rm
Please consider donating to the fund at the link above to help make this protest as big and powerful as possible. Donations will go first to subsidizing the costs of getting people to London and additional funds will be used for banners, signs, leaflets etc If you are Facebook please join and share the event.
For those in Paris, you can book tickets Ferry/Bus tickets by following this link.
France has seen mass Yellow Vest protests against social inequality and the Macron Government for over a year which have resisted brutal state repression. In December France erupted into struggle with a mass strike wave shutting down mass transit, power and other sectors. This working class struggle against attacks on the pension system is growing into a powerful movement that threatens to topple the Macron Government.
It is this fighting spirit that the Yellow Vests will be bringing to the gates of Belmarsh. This is the embodiment of the kind of international action that will be needed to free Assange! Assange's enemies are international in the form of a gang of imperialist Governments (US, UK and Australian) and his defense must be international in the form of ordinary people uniting in his active defense. The chants demanding his freedom will hopefully penetrate to Julian himself and certainly be heard by his torturer in chief Governor Rob Davis.
Julian's next hearings in his extradition process are an Administrative “roll over” hearing on January 14th (these must occur every 28 days for a prisoner in UK on remand) and a January 23rd Case Management hearing. Please try and attend these court appearance if you are in London. A global call out has been made for protests on February 24th on the first scheduled day of Assange’s full extradition hearing.
Please keep sharing this petition. Over 18,000 people have now signed.  We demand that Julian Assange  be given the medical treatment he so desperately needs.in a hospital setting as demanded by over 100 doctors internationally. If and when Julian is returned to prison from hospital we demand the UK Government transfer Julian Assange out of Belmarsh to a minimum security prison, commensurate with his status as a non-violent political prisoner.
Please continue to do whatever you can to build a mass movement demanding freedom for Julian Assange. Please support protests such as the one on January 25th, at the courts and others occurring around the world. This is the only social force that ultimately can win this campaign!
Source: https://www.change.org/p/uk-minister-of-state-for-prisons-and-probation-urgent-call-allow-julian-assange-to-prepare-his-defence-move-him-out-of-belmarsh-now/u/25546762?fbclid=IwAR1XbfD8K2lPYu30qRjOcWrW1UIaJp3efEhkQJiWWKAusV1LGXLZ0mNArUU
News