INTERNATIONAL CRISIS WITH 165,000 FIRES BURNING ACROSS AMAZON RAINFOREST, 70,000 IN BRAZIL 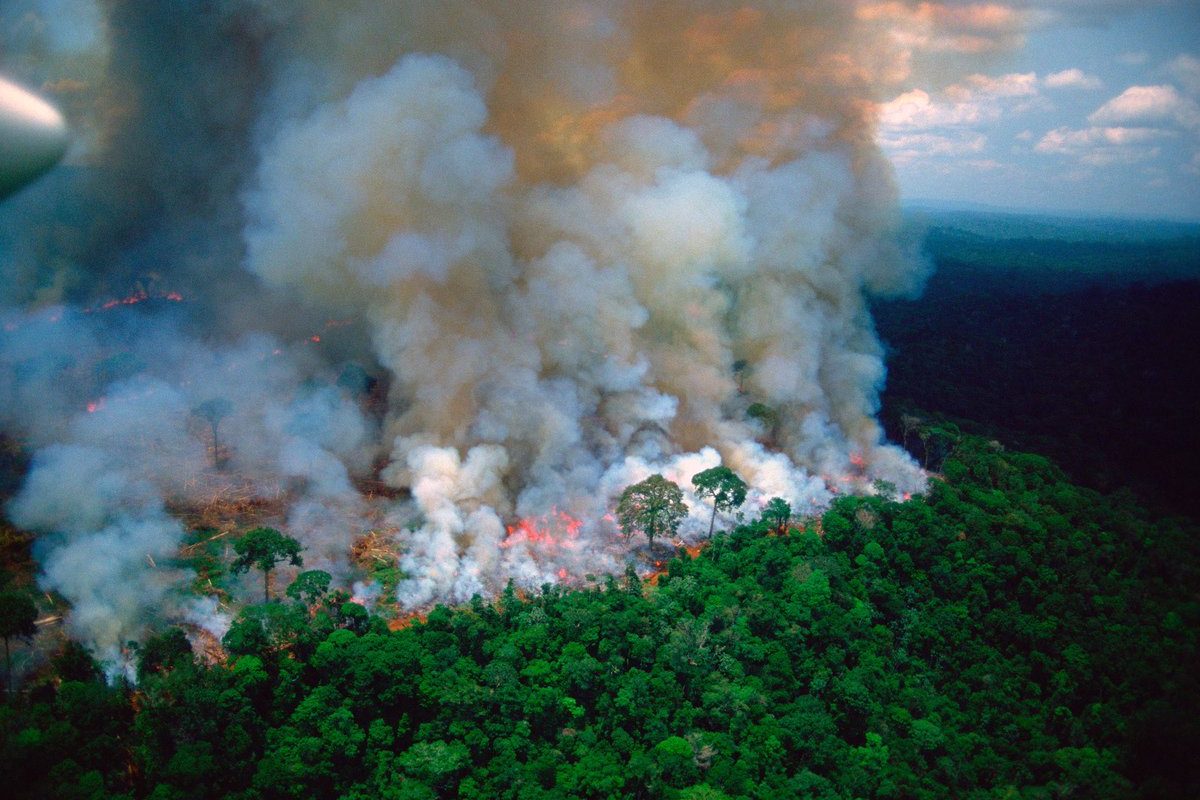 With inadequate firefighting resources leaving massive swaths of the environmentally crucial Amazon rainforest in flames, and Brazil’s conspiracy-breathing president falsely blaming environmentalists and discounting his own government’s data, French President Emmanuel Macron is declaring an “international crisis” and urging the G7 countries to “discuss this crisis” at their meeting this weekend.
More than 165,000 fires were burning as of yesterday, more than 70,000 in Brazil.
“Satellite data from Brazil’s National Institute for Space Research (INPE) shows an 85% increase in the rate of forest fires, with just half of these fires occurring in the Amazon,” UN Climate Action reports. “These fires are not just affecting Brazil; several South American countries, such as Venezuela, Bolivia, and Colombia, are also currently dealing with forest fires.”
The fires “commonly occur during the dry season, caused by natural events such as lightning strikes as well as by farmers and loggers clearing land for grazing,” the publication explains. “Since July, there has been a sharp rise in deforestation, followed by an increase in burning in August. Local newspapers have reported that local farmers have been organizing fire days to illegally deforest land for cattle ranching.”
“What’s making it worse, say some, are some of the economic and environmental policies put in place by the Brazilian government under the leadership of President Jair Bolsonaro, a far-right politician who has questioned the existence of climate change,” CBC says. “With Brazil holding roughly 60% of the Amazon rainforest, there are concerns about what effects the fires will have ecologically and environmentally, particularly their potential to accelerate climate change.”
The immediate impacts are already spreading far and wide. “According to the European Union’s Copernicus Atmosphere Monitoring Service (CAMS), the smoke from these fires is spreading across the Amazon region and as far as the Atlantic coast,” Climate Action writes. “The smoke has been so severe that it caused the skies to darken, plunging São Paulo into a blackout, and turning fresh water black despite being more than 2,000 miles away from the fires.”
At more than 5.5 million square kilometres, CBC notes that the Amazon rainforest “is home to roughly 40,000 plant species, 1,300 bird species and 2.5 million species of insects.” But Bolsonaro, who apparently takes umbrage at his international portrayal as “Capitão Motoserra” (Captain Chainsaw), “has opened up the rainforest for more development. He’s also transferred responsibility for the demarcation of Indigenous lands to the Agriculture Ministry, a move that some compare with a fox guarding the chicken coop.”
“This is the time of year when farmers set fires for cultivation and farming,” said Christian Poirier, program director for the non-profit Amazon Watch. But compared to the first seven months of 2018, “there’s been a 60% jump in deforestation,” he added. “What we’re seeing here is a direct result of mismanagement—the intentional environmental mismanagement by this government.”
Bolsonaro “has also been accused of turning a blind eye to illegal practices by farmers and those looking to make money from tearing down trees,” CBC says. “It’s extremely dangerous in that it gives carte blanche to illegal foresters, to land-grabbing mafias and illegal miners, who are now operating with impunity,” Poirier warned. “And we see fires as a result of that.”
CBC notes that the impacts of change in the Amazon, a “unique and important part of Earth’s ecosystem” that “exchanges a large amount of energy and water with the atmosphere”, don’t end at Brazil’s border.
“We are very concerned about these fires,” said Stephane Dujarric, spokesperson for UN Secretary General António Guterres, “both for the immediate damage that they are causing and also because sustaining forest is crucial in our fight against climate change.”
“The Amazon rainforest is somewhat anomalous in that it is the biggest system of its kind on the planet in terms of how it feeds itself water,” explained Prof. Kai Chan of the University of British Columbia’s Institute for Resources, Environment and Sustainability. That mechanism “isn’t just sustaining rainforest but affecting the rain cycle elsewhere. If it breaks down, it will have major implications…it’s a massive issue.”
He added that “if we lose a few more percentage points of rainforest, we’re at risk of losing this whole system.” And “if we do reach that tipping point and the Amazon starts to shift toward being more savannah-like, that will affect precipitation…it will have a major impact on the global scale.”
Bizarrely, and with zero evidence, “Bolsonaro and his administration say media organizations are exploiting the fires to undermine his government,” CBC writes. “The Brazilian president also said there was a ‘very strong’ indication that some non-governmental groups could be setting blazes in retaliation for losing state funds.”
NGOs, needless to say, dispute the claim.
The latest polling in Brazil, meanwhile, shows that a massive 90% of voters—including the majority of Bolsonaro supporters, politicians representing rural and agriculture constituencies, and evangelicals want the country to intensify its efforts against Amazon deforestation, Avaaz reports.
“Despite the general assumption that the matter creates divergence between the conservative and the progressive, our surveys reveal that congressmen and voters across the political spectrum agree on one thing: the Amazon is a source of national pride, and its preservation is essential for our identity and the health of the environment, in Brazil and all over the world,” said Senior Campaign Coordinator Diego Casaes.
News