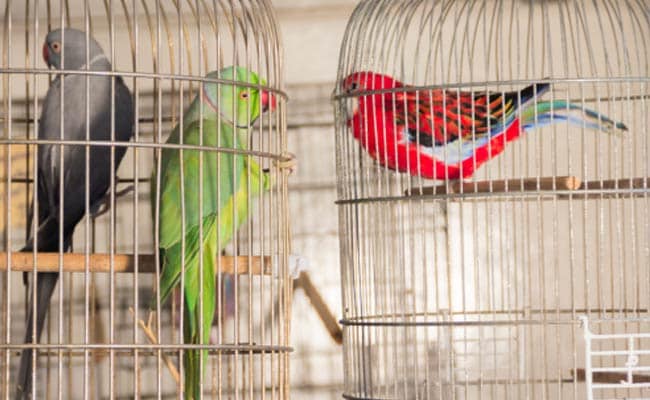 Representational Image
NEW DELHI:  Birds have the fundamental right to "live with dignity" and fly in the sky without being kept in cages or subjected to cruelty, Delhi High Court has said while holding that running their trade was a "violation of their rights".Justice Manmohan Singh expressed anguish that instead of being allowed to fly free, they were "exported illegally to foreign countries without availability of proper food, water or medical aid"."I am clear in mind that all the birds have fundamental rights to fly in the sky and all human beings have no right to keep them in small cages for the purposes of their business or otherwise," the judge said.The high court issued notice to Delhi Police as well as the bird owner, Mohazzim, and sought their responses by May 28.The high court made the observations and issued the orders while staying the direction of a trial court which had allowed some birds to be released to the same person from whom they were rescued on his plea. The trial court order was stayed on a plea by NGO People for Animals, which had challenged the release of birds into custody of owners without hearing the NGO which had freed the birds.The NGO, in its plea filed through advocate SD Windlesh, has alleged that the trial court released the birds into Mohazzim's custody despite arriving at a finding that he was not the owner of the birds.Granting relief to the NGO, the high court said, "...This court is of the view that running the trade of birds is in violation of the rights of the birds. They deserve sympathy. Nobody is caring as to whether they have been inflicted cruelty or not despite a settled law that birds have a fundamental right to fly and cannot be caged and will have to be set free in the sky.
"Birds have fundamental rights including the right to live with dignity and they cannot be subjected to cruelty by anyone including claim made by the respondent (Mohazzim)."Original link: https://www.ndtv.com/india-news/birds-have-fundamental-right-to-live-with-dignity-rules-delhi-high-court-763721
News