May 8th, 2019
By Open
Contributing writer for Wake Up World
Never before in the history of our planet have we been faced with such crisis and challenge: from climate change to the invasion of SMART technology, from environmental degradation to the growing war on consciousness. It’s enough to cause some people to shrink back in their shells, but for many, the converse is true: challenge inspires the emergence of soul, the catalyst to break apart the constrictive mold. The time for playing it small in our shell has long since shattered. Our times call on a new emergent breed of Spiritual Warrior to step up and step out…

I was greatly heartened recently by Extinction Rebellion’s full-on but peaceful protests that brought the City of London to a standstill for a week. Their approach was to actively get arrested for peaceful but determined protest. I spend a lot of my time travelling the world helping to raise consciousness, and in so doing, I witness at first hand the escalation of the ‘matrix‘ through SMART technology in all the towns, cities and airports in fact pretty much everywhere. It is clearly drawing the masses in at an ever escalating rate.
Something has to give, something has to break the stranglehold of the dense energy. It’s going to take more people embodying their unique soul vibration and daring to step out and be them. Whatever the cost.
I say ‘what ever the cost’, but the point being, that to truly embody ALL the qualities of your soul, not just the surrender aspect, is going to take positive action of some kind. I witness with many people around the world that the soul is being forged in the crucible of great challenge. Can it be any other way?

Once there lived a village of creatures along the bottom of a great crystal river. The current of the river swept silently over them all — young and old, rich and poor, good and evil — the current going its own way, knowing only its own crystal self.
Each creature in its own manner clung tightly to the twigs and rocks of the river bottom, for clinging was their way of life, and resisting the current was what each had learned from birth.
But one creature said at last, “I am tired of clinging. Though I cannot see it with my eyes, I trust that the current knows where it is going. I shall let go, and let it take me where it will. Clinging, I shall die of boredom.”
The other creatures laughed and said, “Fool! Let go, and that current you worship will throw you tumbled and smashed against the rocks, and you will die quicker than boredom!”
But the one heeded them not, and taking a breath did let go, and at once was tumbled and smashed by the current across the rocks.
Yet in time, as the creature refused to cling again, the current lifted him free from the bottom, and he was bruised and hurt no more.
And the creatures downstream, to whom he was a stranger, cried, “See a miracle! A creature like ourselves, yet he flies! See the messiah, come to save us all!”
And the one carried in the current said, “I am no more messiah than you. The river delights to lift us free, if only we dare let go. Our true work is this voyage, this adventure.”
But they cried the more, “Savior!” all the while clinging to the rocks, and when they looked again he was gone, and they were left alone making legends of a savior.

It’s time for those actively engaging in The Shift to now take centre stream, to dive into the midst of your immaculate home coming, and to express it out into the world. That doesn’t mean we have to be egotistical or brash, but to be unreservedly, unapologetically who we are. There are many who hold a vibrational frequency that when expressed, begins to  transform the surrounding environment – simply in the process of being.
What is it that fires your soul?

However, it is not just about firing the soul, it has to be forged in the crucible of daily living too. That will certainly mean being authentic in your relationships, being honest and true about how you really feel. We’ll be in society, yes, and it’ll require us to honour the truth of others, but that doesn’t mean compromising your own soul. You don’t have to agree with another to honour them. 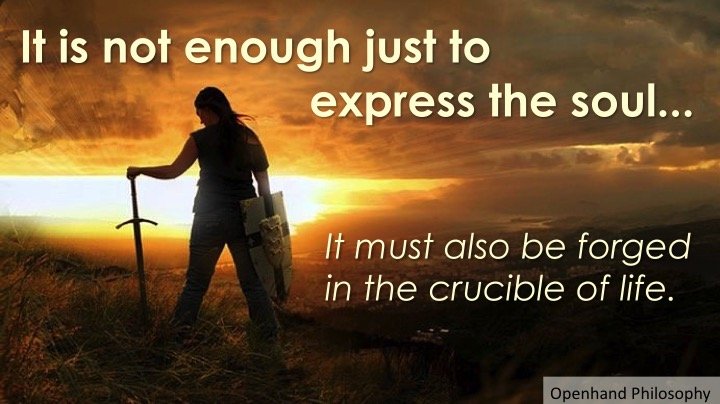 It will mean being creative in some way, expressive, and facilitating the emergence of light. A very positive transformation that’s also happening in society right now is the increased acceptance of diversity – in culture, race and gender. So let’s maximise that opening, fully embrace our uniqueness and dare to step out and express it.
It is truly remarkable how the embodiment of authentic soul frequency can have such a dramatic effect on our lives and life around us. But certainly don’t be put off if many don’t yet get it. Look for the positive feedback loops and let them animate your being – the smile on a person’s face, the knowing twinkle in the eye, or else in synchronicity through the call of a bird, the words in a song or the sign on a billboard.

AT HEART WE ARE ALL SPIRITUAL WARRIORS

The times are challenging for sure. But the Spiritual Warrior is forged in the crucible of great challenge. At heart we are all warriors in our own unique way, and never before in human history, has there been such a need, such a compulsion, for the aligned warrior spirit to arise.
So what is it that fires your passion?How can you be more true to authentic expression?What can you be creating in alignment with the divine as we shift to higher consciousness?
The Shift is calling for the Spiritual Warrior in us all!